Here I’ve put a summary of all the work I’ve done to date, and am doing now, along with the relevant published papers. You can either read about it all in one go here, or on each of the separate tabs.

I am interested in how within-host processes affect between-host disease transmission. This is summarised by the diagram below (adapted from Handel and Rohani 2015 Phil. Trans.). I’m working a bit on both (i) and (ii) in figure 1, and how they interact.

Fig 1. A figure I slightly adapted from the great review by Handel and Rohani 2015 in Phil. Trans.

Recently, I’ve used the guppy-gyrodactylid host-parasite system to show that within host processes affect host infectiousness. One main result of this work is that if a host has transmitted successfully before, it transmits more worms on its second attempt (figure 2a). Intriguingly, worms that transmit from an experienced ‘donor’ seem to be less fit than those from inexperienced donors (figure 2b). I’m not sure why this happens, but I’ll hopefully work it out at some point. It could mean that while ‘superspreaders’ (the infected hosts in a population that transmit infection to disproportionately large numbers of uninfected hosts) do infect more hosts, these infections aren’t as severe as those from ‘normal spreaders’.

Another cool result from this experiment is that more resistant donors transmit more parasites – it’s as though the parasites are jumping ship from hosts that can effectively fight the infection (figure 3). 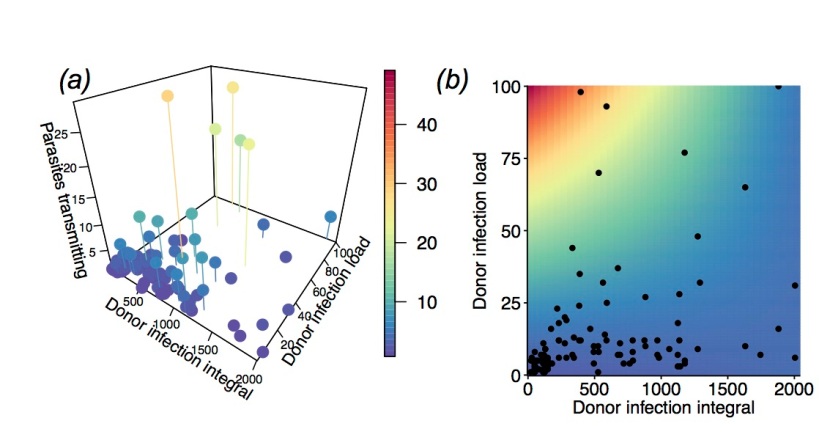 These results (and others) are in an invited contribution to a Phil. Trans. special issue, to be published some time in 2017… Keep a look out for:

This is a bit of a mouthful, but basically I’m trying to work out how the healthy, uninfected individuals in a population may avoid their infected (and infectious) conspecifics. You’d think this would be a no-brainer, but actually, living in groups can be a good thing. Animals get better protection from predators, better foraging opportunities, better mating opportunities etc. etc. So leaving the group entirely because of the risk of becoming infected is a pretty bad option, probably almost as bad as actually being infected. This work is still in progress, but it looks as though guppies only avoid infected conspecifics that pose the biggest risk of transmitting the infection.

This seems like quite an obvious point – being sick makes you easier to catch, so parasites should make infected individuals more vulnerable to predation. Surprisingly, this hypothesis has been little tested outside systems in which the parasite benefits from the predation event, but could have important implications for the evolution of both host and parasite. In the guppy-gyro system, we used startle responses as a proxy for vulnerability to predation, and found that while infection had a limited influence on large fish, small fish covered significantly less ground when they were infected. Given that females are substantially larger than males in natural populations, we think this size effect is likely to result in sex-biased parasite-induced vulnerability to predation (Stephenson et al 2016, Ecology and Evolution).

Thinking about host-parasite systems in isolation ignores the fact that the host and the parasite are part of a community; as such, their interactions with other species are likely to affect the way they interact with each other. One obvious example is the impact of predators on their prey as parasite hosts. Do adaptations that prey species make to predation pressure change their interaction with parasites?

I used a large-scale, long-running study of parasite distribution in natural guppy populations to address this question. Below I’ve given the main results of two papers using these data.

Where there are lots of predators, female guppies (white bars) shoal more, so the parasite can transmit between them more frequently. Where there are few predators, both male (black bars) and female guppies live relatively solitary, dispersed lives. This means the parasite can transmit less frequently, and that there’s less of a sex difference in transmission. Juveniles (grey bars) experience predation from adults across all populations, so they shoal everywhere – that’s why there’s no difference in prevalence across populations among juveniles.